Now that I have my feet firmly planted in new soil, I’m back writing. Which means I’m working on the fourth book in the Darkest Kynd series. Spoiler alert: it’s not going to be about the character you think it is.

For those of you who like the way I’ve been setting up the series, you’re going to be disappointed. Not! It’s just that Kallen still has issues to work through and he’s not ready for his Chosen One.

Who is? That’s for you to wonder and for me to keep my grip on this runaway stallion!

As for his love match, she’s a good hearted girl-next-door like Angelia with a bite fiercer than Violet’s! Add to that a dash of claws and a new-found taste for freedom, and you can bet our hero is going to have a tough time with this one.

I’ll leave you with that and plenty of time to get caught up.

I went gallivanting to a different website, but came back to my old hunting ground. In the meantime, I wrote two more books in the Kynd Series. “Lover in Darkness” and “Lover in Chains.” Both continue the tales of my sexy gargoyles. Check ’em out! 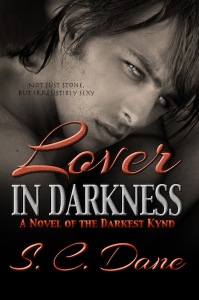 Hi, Readers!
I’m caught in a wormhole and I’ve lost track of time. It’s been over a month since my release of Lover In Stone, and I owe each of you a thank you for your kind reviews of my latest book, especially since it’s so different from my first series The Luna Chronicle. Yeah, they’re both paranormal romance, but the similarities end there. I won’t bore you by listing all the ways the writing has changed because you already know them.
Instead, I’m going to share what Gemma Davis had to say:

“Well, S C Dane has done it again! This story is about Grotesques before they become encased in stone, kind and gentle beings forced to walk though hell, everyday and night. Is there someone to love them and show them the light of Earth again? By the end of the first chapter, SC Dane got you! Each of the new characters become real – you feel the Grotesques sorrow – their questions and their indecisions. By the end of the book you have met, loved and hated the characters. When you reach the last page, you’ll find a small smile on your face and then that smile turns upside down. NO! I have to wait for the next book to learn the fate of the other Grotesques! I would give Love in Stone – 5 Stars”

Pretty cool, huh? Gemma was a fan of my Luna Chronicle series, so to hear her say how much she liked Lover In Stone let’s me know I’m on the right track writing-wise.
Unfortunately, she’ll have to wait until next summer for Dark Lover, the second book in my Kynd series. This one will feature Darken, whom you all met in the first book (he visited Merrick at Hell’s Archway then gathered the other Kynd when he learned Merrick was in trouble.) If you visit my Pinterest page, you’ll find my inspiration for both Darken and his love interest, Daniela.
Right now, I’m working on the third book, which is all about the bear chimera, Urick, and his struggles with his love, Violet, who embodies everything he hates about himself. Such turmoil!
Anyway, it’s why I’ve been lost in that wormhole. If I can finish it by the end of September, it can be released just a couple of months after Dark Lover and you guys won’t have to wait so long to find out what happens with my gargoyles and chimeras!
Until then, let me say Thank You once again for your support. In my head, my characters are very much alive, so it’s a true pleasure to learn that my readers are as excited about finding out what happens to them as I am.
Have a wonderful day, All, and happy reading no matter what it is 🙂
My very best,
~S.C. Dane

Posted in Lover in Stone Serial

Hey, all! This might not be the place to invite my fans to read and review my new release, but screw it. If any of you have read my bio on my website you already know I’m not much on rules. So, here we are. My new book Lover In Stone,

a paranormal romance, was officially released on Amazon and I need reviews for it. I’m offering a free read in exchange for a review. It sounds like I’m bribing folks for five stars, but again, those who know me won’t hesitate to share their honest opinions. Because that’s what I want: Honesty. Short and sweet, too. Click how many stars you think it deserves and call it good. If you want to wax on about why you loved, liked, or hated it, go ahead. It’s up to you. Just bear in mind my writing is graphic. If you’re squeamish, you’ve been warned.
To get started, you can email me. I’m going to need to know who and where this free read is going to. Otherwise, nothing will happen. So, get in touch if you’re interested. I’m at scdane@yahoo.com.
I’m looking forward to hearing from you.
Here’s a blurb to whet your appetites:
To the world they are the Grotesques—hideous chimeras and gargoyles. But before they are locked in their stone prisons, they are Kynd——magnificent beings condemned to prowl the nightmares of every realm.
Their tortures will doom them.
The love of a Chosen One could save them.

Merrick has become a beast. Angelia has been chosen to save him. Will their fragile love survive the Hell the chimera is chained to?

Posted in Lover in Stone Serial

LOVER IN STONE, Installment No. 21

INSTALLMENT No. 21 #lips #Angel #gargoyle
“Merrick?” Angelia’s voice quavered like the chicken she was, and she silently cursed herself. The Chimera needed someone sturdy, not some quaking ninny, so she’d better stiffen her Ramen noodle spine to be strong for him. Even if she had to fake it.
Her lips had not suddenly gone dry, dang it. But the swiping of her tongue to moisten them was like a slap to the face of her denial. Which she chose to ignore, and stood up, coiling her sweaty fist tighter with Merrick’s hold so he wouldn’t let her go.
Because she saw his agony. Heck, she felt it.
Whatever he did up on that Archway wasn’t good.
She’d seen the bony carcasses, so did she really want to know the gruesome details?
Yes. If it meant she could ease some of that drowning grief from his gray eyes, then yes. She wanted to comfort him so bad the need to do it quivered inside her, her body demanding she open up and take him into herself.
Acting on instinct, she reached out, pulling Merrick’s rough hand around her back and pressing her body to his.
He hissed as his arm drew her in tight. Through the opening of his unbuttoned leather jacket, she could see the hammer-like blows of his heart punching the thick muscles of his chest.
Jiminy, she could smell him, forcing her to remember there was a reason she’d let herself get squashed this close to Merrick, and it wasn’t to bask in that crystalline wildness. She was trying to give him solace.
“You stop souls from entering Hell, don’t you.” It wasn’t a question; she’d seen the evidence. But she wanted to come across as accepting, not as some dang coward.
He growled his answer, and Angelia closed her eyes as the scrape of it dragged delectably across her skin, erupting goosebumps in its wake.
“Yes.”
Ooh, she so, so, so loved his growl. Why didn’t she want to bask? She needed to dredge up every ounce of self-restraint she had to keep herself on track. But she would, for Merrick’s sake. “And humans without souls who wish to pass?” She knew such beings existed. They were the stuff of her nightmares from as far back as she could remember. They were the things the Gargoyles and Chimeras of her dreams protected her from.
They were probably why she idolized the Kynd.
His forehead pressed to her crown, his uneven breaths caressing her hair. “Angel, no more.” When he pulled back to look at her, he somehow plumbed a reassuring grin, and the sight of it made her go all gooey inside. Maybe it was because he seemed to be asking for mercy while his strong teeth reminded her that physically, he wasn’t vulnerable at all. “This Castle is probably the last beautiful thing you’ll see for a few days. You should be paying attention to that instead.”
Pfft. She highly doubted it. Merrick was beautiful, what with his black bangs curling in little spikes across his forehead, like a row of mini scythes, and cupping his smallish ear, which dragged her attention so her gaze followed the cords of his neck to the leather of his collar.
And he’d just called her Angel.
She bet he didn’t even realize it.
Besides, when she pulled her mind out of the sexual gutter, she noticed she was experiencing something far more beautiful than architecture or a sinful body: she was aglow from receiving the compassion of a Chimera.
Now that she knew how well-guarded a secret that was, she felt the privilege of his gift. He was treating her like Kynd.
Which made him irresistibly sexy.
Even to a virgin.
Her core squirmed again, but this time it pulsated, wetting her panties.
The muscles of Merrick’s broad shoulders bulged as he lowered his head to take a deep breath.
Dear God, he was sniffing her! He’d feel, too, the heat of her hand, the heat of her thighs, and she had to struggle not to place his hand where she readied for him, she had to resist the flaming urge to pull it between her legs and ride his rough palm.
His fingers gripped hers so hard she thought maybe he might break her bones. But she couldn’t stop her eyes from wandering low, to watch his manhood thicken, stretching the leather of his leggings. Her tongue stole out to caress her lower lip, for different reasons this time.
“Come on, Angel.” As Merrick tugged at her to resume their march toward the Castle, she caught the glint of thick fangs. Which should have frightened the bee turds out of her. Seriously, what was he going to do with those? Bite her?
Oh, please, yes.
She ought to wash her brain out with soap. She wanted the Chimera to bite her? Maybe it was time to stop living with Vampires.
Kynd didn’t drink blood, she knew that much. But she couldn’t shake visions of Merrick’s sharp teeth pinching her nipples, or sucking her breasts in between them.
Gads. She wasn’t helping the situation here, not when her nipples went rigid with the promise of what Merrick’s mouth could do.
Turning her attention to where her feet were going would be far more helpful. Merrick was dragging her toward the Castle, so she shifted gears to follow willingly, and freed her mind from her breasts to think about the words he’d spoken as he’d pulled her with him.
He’d called her Angel again. Merrick might have spoken to her like his teeth were smashed together, but he had called her Angel.
An endearment, not a curse.
She knew that because he didn’t let go of her hand.
He kept hold of her.
And she took it for the truce it was.
~S.C. Dane
~Installment No. 22 coming Saturday, April 11, 2015.

LOVER IN STONE, Installment No. 20

LOVER IN STONE, Installment No. 19

LOVER IN STONE, Installment No. 18

LOVER IN STONE, Installment No.17

LOVER IN STONE, Installment No. 16